The wait is almost over! The long awaited Prince autobiography "The Beautiful Ones" (with Dan Piepenbring) will be released on October 29!
This book is GREAT and a MUST read!


From Prince himself comes the brilliant coming-of-age-and-into-superstardom story of one of the greatest artists of all time—featuring never-before-seen photos, original scrapbooks and lyric sheets, and the exquisite memoir he began writing before his tragic death.

Prince was a musical genius, one of the most talented, beloved, accomplished, popular, and acclaimed musicians in history. He was also a startlingly original visionary with an imagination deep enough to whip up whole worlds, from the sexy, gritty funk paradise of “Uptown” to the mythical landscape of Purple Rain to the psychedelia of “Paisley Park.” But his most ambitious creative act was turning Prince Rogers Nelson, born in Minnesota, into Prince, the greatest pop star of his era.

"The Beautiful Ones" is the story of how Prince became Prince—a first-person account of a kid absorbing the world around him and then creating a persona, an artistic vision, and a life, before the hits and fame that would come to define him. The book is told in four parts. The first is composed of the memoir he was writing before his tragic death, pages that brings us into Prince’s childhood world through his own lyrical prose. The second part takes us into Prince’s early years as a musician, before his first album released, through a scrapbook of Prince’s writing and photos. The third section shows us Prince’s evolution through candid images that take us up to the cusp of his greatest achievement, which we see in the book’s fourth section: his original handwritten treatment for Purple Rain—the final stage in Prince’s self-creation, as he retells the autobiography we’ve seen in the first three parts as a heroic journey.

The book is framed by editor Dan Piepenbring’s riveting and moving introduction about his short but profound collaboration with Prince in his final months—a time when Prince was thinking deeply about how to reveal more of himself and his ideas to the world, while retaining the mystery and mystique he’d so carefully cultivated—and annotations that provide context to each of the book’s images.

This work is not just a tribute to Prince, but an original and energizing literary work, full of Prince’s ideas and vision, his voice and image, his undying gift to the world.
The REAL book that PRINCE(r.i.p.) was born to make is FINALLY on it's way!!!!

Absolument !
"I love this song."
Haut 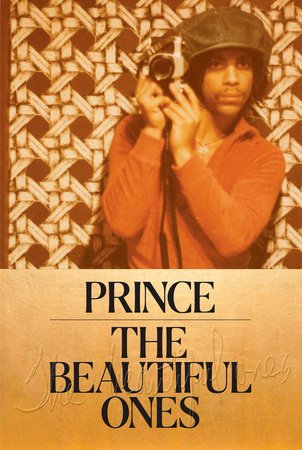 https://www.newyorker.com/magazine/2019/09/09/the-book-of-prince a écrit :He’d written about his childhood and adolescence in Minneapolis, starting with his first memory, his mother winking at him. “U know how U can tell when someone is smiling just by looking in their eyes?” he wrote.
“That was my mother’s eyes. Sometimes she would squint them like she was about 2 tell U a secret. Eye found out later my mother had a lot of secrets.


https://www.newyorker.com/magazine/2019/09/09/the-book-of-prince a écrit : "Artists have the ability 2 change lives with a single per4mance. "
[...]
“Music is healing,” he said. “Write that down first.” This was to be our guiding principle.
"Music holds things together.”

More than three decades later, in 2016, he announced he had started to write his autobiography.

The purple prose was never finished.

On the 21 April that year he died aged 57, three months into the project, having hand-written 28 pages about his childhood, using his trademark abbreviated spellings, U, R, 2, 4 and "eye" for I.

Image copyrightEDWIN TSE
Image caption
Dan Piepenbring, 33, was personally selected by Prince to work with him on his book
"The book coincided with an inward turn in what he was experiencing, in what would turn out to be his final years," says Dan Piepenbring, 33, the writer Prince chose to collaborate with on his memoir The Beautiful Ones, named after his track on the Purple Rain album.

"I think for the first time he was aware of his legacy, aware of that he had power to shape the narrative around him. And maybe he was coming to be more aware of his mortality," Piepenbring tells the BBC.

Purple reign: Obituary
A life in pictures
Fans pay tribute
Sixteen pivotal songs
After Prince's death, his estate contacted Piepenbring, asking if there was a way he could turn what had been written into a book and offering access to the archive at Prince's Paisley Park HQ.

Image copyright1986 JOSEPH GIANNETTI
Image caption
The book includes an image of Prince playing the guitar in bed at his home in 1978
Using photographs, family memorabilia and writing his own introduction to explain the context of Prince's pages, The Beautiful Ones is the closest there will ever be to a Prince autobiography.

Here are seven (that most Prince of numbers) things we have learnt about the pop star from the book about him:

1) Prince was not a fan of Ed Sheeran
Image copyrightGETTY IMAGES
In a section on his worries about the future of radio, Prince complains: "They keep trying to ram Katy Perry and Ed Sheeran down our throats and we don't like it no matter how many times they play it."

So what was his problem with Ed?

Piepenbring admits: "To be honest I was so much in agreement with him on that subject that there didn't seem to be any more to say about it at the time. More than a grudge with a few artists in particular, what he was bemoaning was a culture that simply doesn't allow artists to colour outside the lines."

2) He was a fan of Kung Fu Panda 3
Image copyrightGETTY IMAGES
Image caption
Jack Black's Kung Fu Panda made Prince laugh
Prince often hired out his local cinema in Minneapolis, late at night and invited friends and bandmates to private screenings. Dan was there for one such outing. Prince's choice of film? Kung Fu Panda 3.

"He had his assistant bring him some popcorn," Piepenbring recalls. "He sat alone in the back row, but I remember hearing him laugh a few times. Right when the credits rolled he got up and skipped down the stairs. He was wearing these light-up sneakers. He was so childlike in that moment. I know he also liked Finding Nemo. He enjoyed these fairy tales."

The book also reveals Prince as a fan of the Richard Curtis's 2013 time-travelling tearjerker, About Time, particularly the scene where Rachel McAdams meets her love interest in a sensory deprivation diner. "Imagine that meal" writes Prince.

3) He hoped his autobiography could 'solve racism'
Image copyright1986 JOSEPH GIANNETTI
Image caption
This outtake, which appears in the book, was from Joseph Giannetti’s For You photo shoot in 1977
Prince believed that his book could be powerful. Very powerful.

"In one way he wanted it to be an autobiography, a fairly straightforward story about his life, his childhood and especially his parents," Piepenbring says.

"But he also saw the book as a way to extend the activism that he had begun, especially his work with Black Lives matter. 'Could it solve racism?' That really stopped me in my tracks.

"To sit in a room with him and lock eyes with him and to hear him utter that question. Something that feels impossible in any other context, in that context suddenly feels natural, and makes you bristle with excitement."

4) The young singer learnt the facts of life from an R-rated movie
Prince was never directly told about the birds and the bees. His stepfather saved himself from having "The Talk" by taking him and a couple of his friends to what he described as "a raggedy R-rated [age-restricted] drive-in movie".

Prince concluded that this was not the best way to learn about sex. His preferred method? "Having the Song of Solomon read & discussed with U by someone who loves U." The Bible wins out in Prince's mind.

Piepenbring was relieved at Prince's willingness to write about his sexuality, saying: "I had worried, given his aversion to his racier songs - he no longer played Darling Nikki or Head, or any of those. I feared that the book's pages might shy away from his sexuality, but it was all there - very humorously, cheekily rendered."

5) He had his first kiss playing happy families
It is perhaps not surprising that Prince developed an interest in girls at a very young age.

In a chapter called Kiss he details how a girl called Laura "who was only five or six" enlisted him for a game of House, saying: "We weren't the 1st interracial couple in Minneapolis, but we were no doubt the youngest".

He was kissed three times during the game, once on the way to "work", once when he returned and "one b4 U went to sleep that night". Each kiss lasted less than three seconds, but meant "everything to him".

6) Prince was working on the book four days before he died
Image copyrightGETTY IMAGES
On the 15 April 2016 Prince's private jet made an emergency landing and he was hospitalised. That week he called Piepenbring to let him know that he wanted to continue with the book.

"When my phone lit up with a Minneapolis area code I was overjoyed. I was so relieved to hear that he was alright and he wanted to tell me he was still thinking actively about the memoir.

"He went into the thoughts he was having about his parents and said that one of his life's central dilemmas was figuring out what they meant to him and how he was living out their lives with his own.

"He said he was going to stop touring and would really get down to business. I came away from that call with a tremendous optimism. Of course, it wasn't to be".

7) The Beautiful Ones was to be the first in a series of books
Image copyright1985 ALLEN BEAULIEU
Image caption
The book also includes an image of Prince sipping orange juice backstage during the 1981 Dirty Mind tour
The memoir was not going to be a one-off.

"This book, to his mind was going to be the first of many," explains the author.

"And for the rest of my life I'm going to be wondering what else there was to say, and what form the book could have taken if he'd lived. There's definitely a sadness and a sense of wonder in everything he didn't get to say". 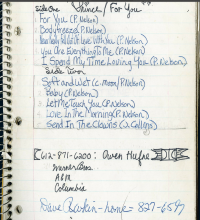 Les fams st des ''fètards '' qui vont assister au concert JHill et MDay and the Time
" The time I burned my guitar it was like a sacrifice. You sacrifice the things you love. I love my guitar". Jimi Hendrix
Haut