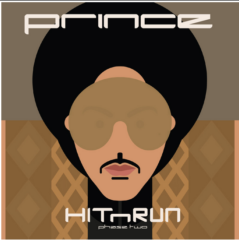 EXPANSIVE COLLECTION OF SONGS FEATURES THE NEW POWER GENERATION AND WAS IN THE MAKING FOR 3.5 YEARS

Multi-platinum music icon Prince has surprised fans globally with the unexpected release of a new 12-song album, HITNRUN PHASE TWO. The expansive collection of songs, many featuring his super-group The New Power Generation, appeared exclusively on TIDAL today at 9AM ET. The album was meticulously crafted over a nearly four-year period – gradually adding songs until the sequence was perfected and ready for release. A 16-member horn section is featured throughout the album, combining Prince’s NPG HORNZ and Minneapolis’ HORNHEADS, the latter a frequent addition to his larger studio ensemble.

Prince’s quintessential songwriting and inimitable vocal abilities are on full display in songs such as “ROCKNROLL LOVEAFFAIR,” “LOOK AT ME, LOOK AT U,” “WHEN SHE COMES,” and the breath-taking ballad “REVELATION.” Also included in the sequence is the protest song “BALTIMORE,” which received rave reviews upon release earlier this year. NPR’s Ann Powers noted: “BALTIMORE is truly a Sly protest – that is, in the style of Sly and the Family Stone, specifically the band's early, joyful, genre-obliterating anthems like "Everyday People." At its peak, "BALTIMORE" presents itself as a new "Dancing in the Streets” – a song that offers a brand new beat in the name of real change.”

For those who know and love Prince's past work – his otherworldly musicianship and obvious respect of the craft – HITNRUN PHASE TWO will be a very welcomed addition to the collection; a gift to Prince’s Purple Collective and an instant standout in his already unparalleled 38 album catalog.

TIDAL is an innovative platform to experience and discover music from artists around the world, enjoy access to exclusive and curated content, and connect and share with artists. TIDAL is available in more than 44 countries with a 30 million song catalog, and more than 75,000 high quality videos. The service offers high-fidelity CD sound quality, high quality video, expertly curated content and unique experiences.

Jazz is the teacher, and funk is the preacher
Haut