Let's Go Crazy (incl. Frankenstein)
Endorphinemachine
Screwdriver
She's Always In My Hair
The Love We Make
Guitar
Plectrum Electrum
FixUrLifeUp
I Like It There
Purple Rain

YO BABY
TELL ME WHERE THE PARTY'S AT

(bah à San Diego, banane)
Nobody broke your heart, you broke your own because you can't finish what you start
Haut

Wikipédia a écrit : Claude François, the French singer and writer of "My Way" used the song, played with a brass section, as an introductory theme to his live concerts.


PRINCE & 3rdEyeGirl brought the Live Out Loud tour to the Hard Rock San Diego Friday night for a 2 night stand that will consist of 4 shows. 2 of those shows happened last night at the Hard Rock.

3rdEyeGirl was late starting but PRINCE promised to make up for it and he more than did, performing for 88 minutes for a first show that was the best of what I have seen of the tour so far. When he took the stage, he was looking for someone..or someone's as the case would be. It was 4 beautiful women ironically standing next to me.

3rdEyeGirl ripped into "Let's Go Crazy", "Endorphinemachine", "Screwdriver", and then a "ooh San Diego" chant mixed in with "Stratus" and then it was time to talk about those beautiful girls.

After that, PRINCE went into a beautiful version of "Nothing Compares 2 U" with Donna Grantis providing a crazy beautiful solo to accompany it. PRINCE then went into his vast catalog while performing on the keys and pulled out "The Max" which kept the party moving.

During "I Could Never Take The Place Of Your Man" he changed guitars and during the line of "It hurt me so bad when she told me with tears in her eyes" he took the guitar plug and pretended it was a tear before plugging it in. People went nuts for that.

PRINCE also performed an extra funky version of "Alphabet St." which was awesome. For the encore, he brought out model Damaris Lewis to dance during "Nasty Girl" and about 12 other dancers.

The show was high energy and we enjoyed ourselves completely.

The second show kicked off with "Let's Go Crazy", "Endorphinemachine" and a super extended version of "She's Always In My Hair" complete with "Go Ida" chants from the crowd on her bass solo. PRINCE then sat behind the keys and went into a soulful version of "The Love We Make" which transitioned into "Guitar" with him taking center stage again for the song. That was followed by "Plectrum Electrum", "FIXURLIFEUP", and then "I Like It There" which at one point made PRINCE lay down on the stage and take it all in.

Then PRINCE played "Purple Rain" and something happened that has never happened in the 100+ times I have seen him perform. PRINCE wanted us to be there now. Don't think about yesterday. Don't think about tomorrow. Don't think about your troubles. Be here now. I looked around me and behind me. I saw there was a person who was in a wheelchair standing up with his 2 female friends and he was crying. I brought my eyes back to the stage and was there in the moment. I'm not sure if it was seeing what was going on around me, but....I started to cry. Never has that happened with that song with any other band of his. So Donna, Hannah, Ida, and Princah, thank you for moving me. It may not have been dedicated to me but last night,but it sure felt like it was.

There is something special about this band and last night proved it to me in many ways. The crowd would not let them go and even wanted more after 2 encores in which he played "2Y2D" and "Cause & Effect" while director Sanaa Hamri looked on from the side of the stage.

San Diego, if you're still wanting more, come to the Hard Rock tonight as there is an early show and late show before 3rdEyeGirl comes to Anaheim and Denver before closing out the tour in Minneapolis May 25th.-DocFB
Diagnosis: Hard Rock In A Funky Place!

For set lists, click on the continue reading button below 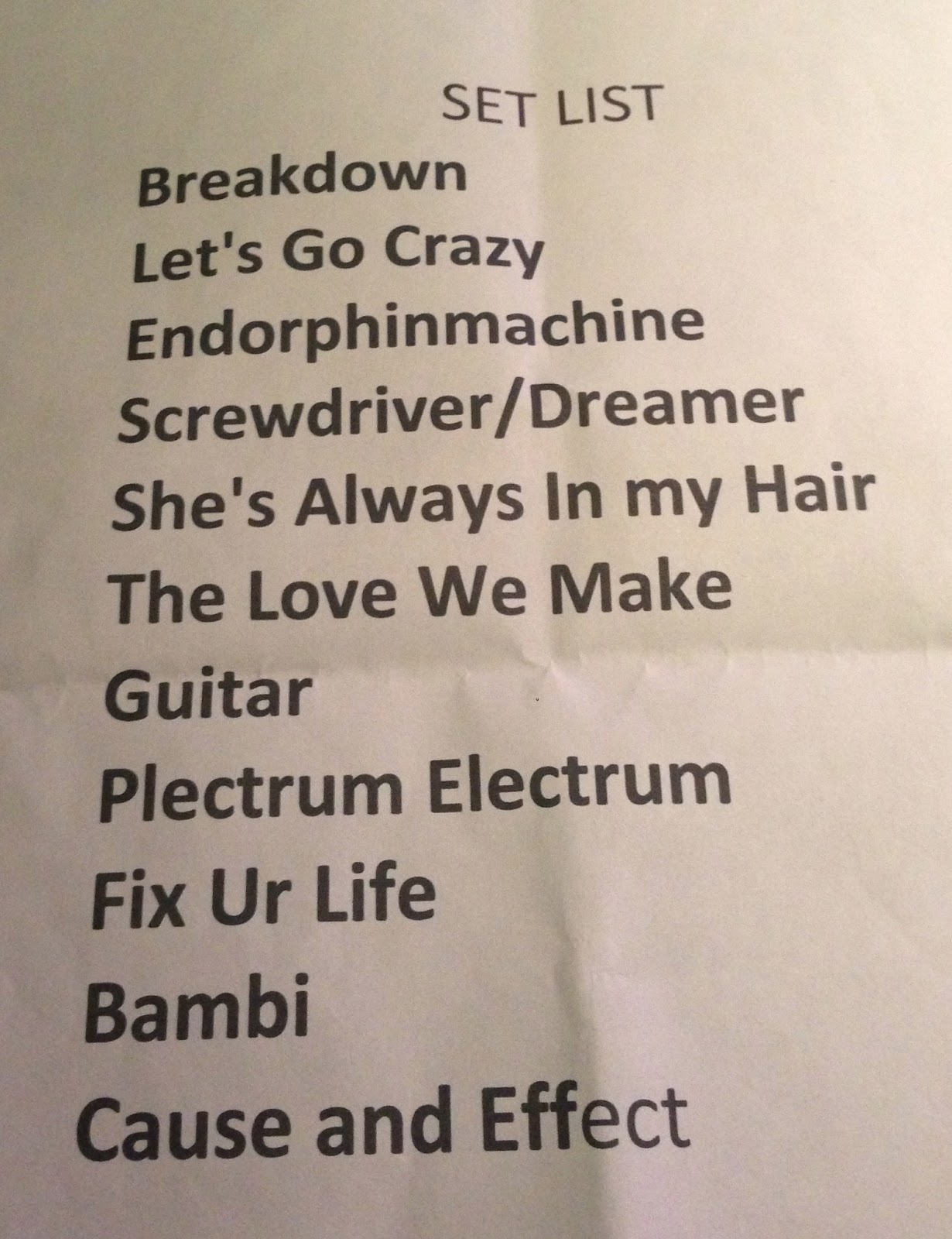