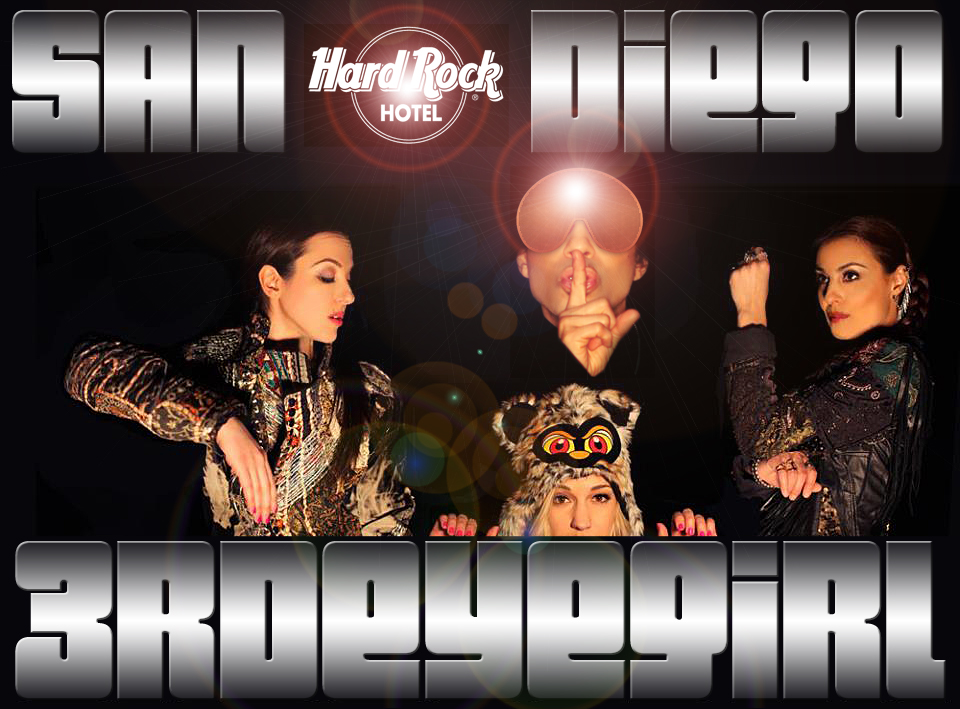 PRINCE & 3rdEyeGirl took over San Diego Saturday Night for the 2nd night of a 2 night residency at the Hard Rock where they performed an early show and a late show. After the late show, they shot a video for "FIXURLIFEUP" directed by Sanaa Hamri.

3rdEyeGirl opened the early show with "Let's Go Crazy", "Endorphinemachine", "Screwdriver" "She's Always In My Hair" and then went into "Liathach" a cover by Jo Hamilton.

During the performance of "FIXURLIFEUP" a new lyric video for the song was played in the background that featured Hannah & Josh Welton & the 3rdEyeGirl crew getting into a shoving match along with pieces of history. Towards the end of the video flashed several words such as "Love", "Gun Control", "Peace" and ending with "New World Translation" before PRINCE went into "Bambi" which saw him and Donna Grantis play the guitar between their legs. The crowd was eating it up.

After "Bambi" PRINCE asked the crowd to give them a minute to tune up and they will be right back. What looked like was happening is it gave the camera crew time to change out discs from their equipment. When they continued, they played "Sometimes It Snows In April" with PRINCE on guitar.

Prince asked if they can keep the groove right there for a moment as he say behind the keys and went into "How Come U Don't Call Me Anymore" followed by a short version of "Adore" and a short version of "Purple Rain" with PRINCE talking about this being strange times in America right now and it is better if everyone is getting along to the same thing. "It is all about music, music, music" PRINCE proclaimed as he got the crowd to join in with him.

For the encore, he was joined by Damaris Lewis for "U Got The Look" along with Van Jones later on, ending the first show with a "Ooh San Diego" chant along with "Ain't nothing like a purple party because a purple party don't stop"...but it just did. Unless you were going to show 2.

PRINCE started off the second show with a "Shhh" to the crowd before playing "Breakdown" with the curtain closed and when the curtain opened, he was behind the boards playing hidden while 3rdEyeGirl was on stage. Phenomenal song. Cannot wait for it to be released. Just like that, the curtain closed. It re-opened a minute later with PRINCE sitting on top of the drum kit, unlike the first show where he started it off by jumping off the left speaker.

After a guitar-shredding version of "Let's Go Crazy", 3rdEyeGirl went into "Let's Go" by The Cars and then "Crimson & Clover". When PRINCE took off his guitar he also signaled for the left of the crowd to take off his jacket. Some reached for his hand first but PRINCE let them know the jacket. The left side came off quick and PRINCE turned for them to take off the right and it seemed to be coming off but also seemed like PRINCE was holding on to it a little bit so it wouldn't come off. When it finally did, PRINCE made sure he was holding on to it and pretended to put it by the speaker but putting it on the other side of the stage, signing "You must think I'm crazy giving you my jacket as a souvenir." That almost happened with his guitar in the first show.

PRINCE gave the bass back to Ida and took his place behind the keys for "Nothing Compares 2 U" and I believe he said "It's been 7 hours and 13 years" although it could have been days, I think he said years. Not too big of a deal but noticed it.

He then went into "The Max" which was a longer version than Friday's and he took it to church in the end.

Following "I Could Never Take The Place Of Your Man", "Guitar" and "Plectrum Electrum" PRINCE played a very long version of "When We're Dancing Close & Slow", really taking his time with it. During the song, he took a towel and gently dabbled Ida's face to take off the sweat and offered it to Donna before taking his place in front of the microphone where it seemed he captivated the audience with the song...and where he would throw the towel. It was to the left front of the stage btw.

PRINCE closed out the set by going into "Bambi" and took a while for the encore. Stating while the curtain was still up" San Diego, I'm going to hurt you. You're gonna make me hurt you. You're gonna be soaking your feet tomorrow. He went into "Nasty Girl" with Damaris Lewis strutting her stuff on stage to a very long sample of the song. Then came a lot of people as PRINCE went into "When Doves Cry", "Hot Thing", "A Love Bizzare", a snippet of "Love" followed by "Housequake", "I Would Die 4 u", "Pop Life", "Shockadelica" with PRINCE singing a few verses before going into "Xtraloveable" with PRINCE proclaiming "How do you like me now?" Well PRINCE, we like you now and "Living Out Loud".

We thought the show was over and was saying my goodbye's as we were then told to get back to the pit area as 3rdEyeGirl wants to shoot a music video. We figured it was for "FIXURLIFEUP" and Sanaa Hamri came out letting us know about the video and to not take any photos. This was done by Damaris Lewis before show 1 and by Hannah Welton before show 2.

PRINCE came out dressed in black wearing the bee keeper shades. The song was lip synced but it was a video. They did it in one take and PRINCE asked if he could play one song for the crowd. After a few moments, they went into "COOL" with PRINCE changing the lyrics to dining in "San Diego" which was to the delight of a few hundred that stayed around to be a part of the video.

I know a few people have been asking me when the video would come out and will it get a proper release. Sanna is so good, I would expect the video along with an iTunes release (Finally!) by the end of May, perhaps even around the Billboard Awards May 19th.

The "Live Out Loud" tour hits Anaheim May 7th & 8th followed by Denver May 12th and 13th before finishing up in Minneapolis May 25th.-DocFB

For the set lists, click on the continue reading button below...