PRINCE's 1st Piano & A Microphone show was a tribute to Denise Matthews/Vanity.
" It was basically a tribute to her. Songs for her, stories about her. He sang the ladder and said Vanity instead of Electra and changed the words. He said she was the finest woman in the world (and never missed a chance to tell you so )
He got quite emotional at one point and had to leave the stage, before returning and thanking us for our patience (!!)" 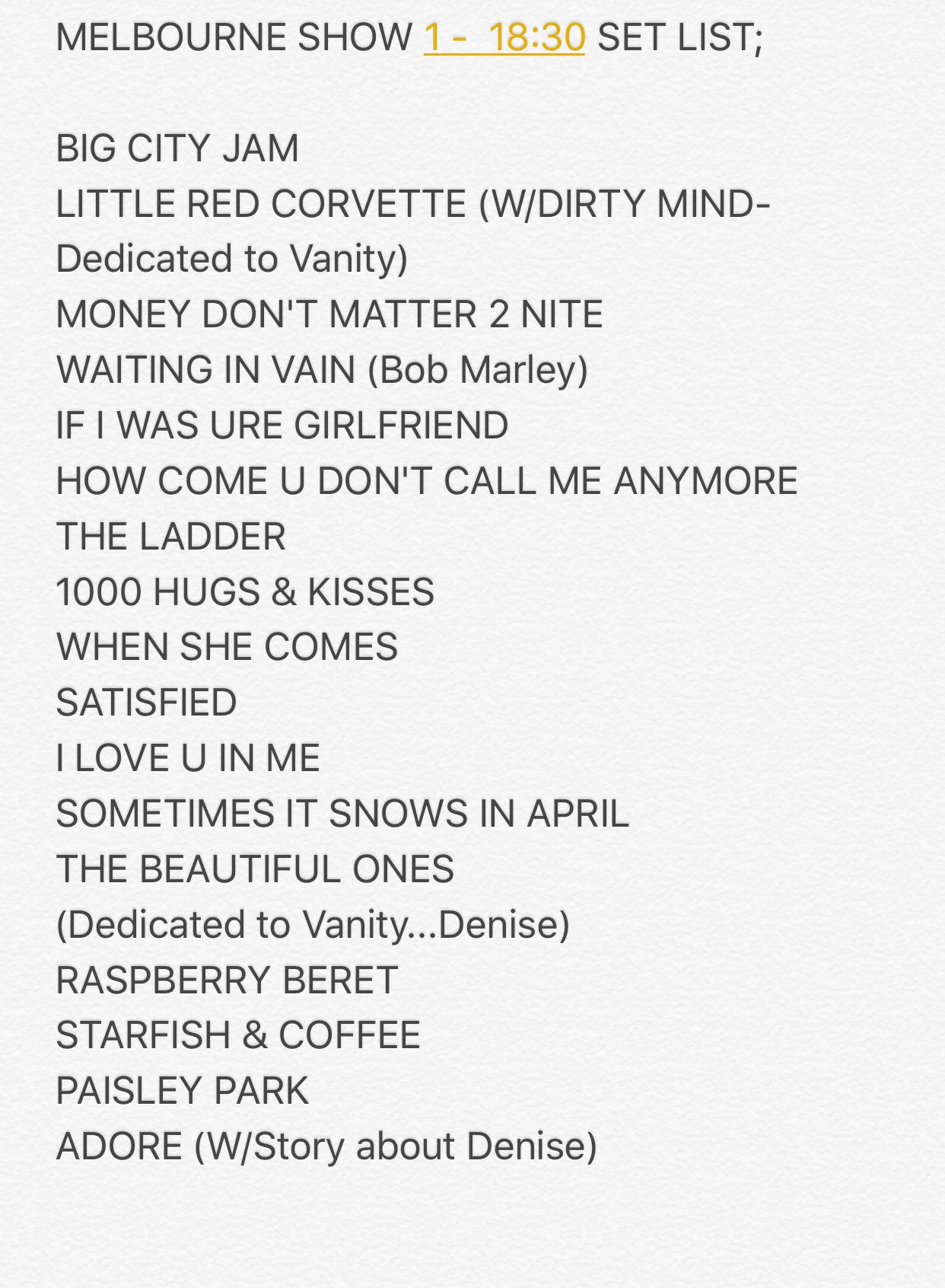 Prince may be the last of his kind.

Australia is the surprise first global leg of his Piano and a Microphone solo tour, a tour which didn’t exist a month ago but will be talked about for years.

Armed just with a piano and that immense talent, Prince put on the kind of concert you just don’t expect to see from a superstar. It was spontaneous and intimate. It was like a private piano party, just with 2000 people watching. It was pure Prince.


His first Melbourne show at the State Theatre was particularly emotionally charged — Prince admitting he’d just found out about the death of Denise Matthews, aka Vanity, his ex-girlfriend from the early ‘80s and protoge when she fronted the band Vanity 6.

“Someone dear to us has passed away, I’m gonna dedicate this song to her,” Prince said before playing a touching version of Little Red Corvette with a touch of Dirty Mind — songs from the era when they were together.


Prince reworked his classic The Ladder to replace the name ‘Electra’ with ‘Vanity’ — so the lyrics ran “This Prince, he had a subject named Vanity who loved him with a passion, uncontested.”

After an encore Prince returned to the stage noting “I am new to this playing alone. I thank you all for being so patient. I’m trying to stay focused, it’s a little heavy for me tonight. Just keep jamming ... She knows about this one.” That introduced a truly incredible version of The Beautiful Ones, another song from the Vanity era (she was the original choice for lead in the Purple Rain movie), the song ending with Prince changing “my knees” for “Denise ... Denise”.

Unusually chatty and candid, he continued going off script. “Can I tell you a story about Vanity? Or should I tell you a story about Denise? Her and I used to love each other deeply. She loved me for the artist I was, I loved her for the artist she was trying to be. She and I would fight. She was very headstrong cos she knew she was the finest woman in the world. She never missed an opportunity to tell you that.”

Prince then opened up about a fight where he threatened to throw Vanity in the pool. She said “You can’t throw me in the pool, you’re too little”. He then asked his six foot bodyguard Chick to do the dirty work for him.

“I probably shouldn’t be telling this story,“ he said, “but she’d want us to celebrate her life and not mourn her.”

The show mixed hits (Money Don’t Matter 2Nite, If I Was UR Girlfriend, How Come U Don’t Call Me Anymore) and covers (Bob Marley’s Waiting in Vain) with deep cuts, including the recently reclaimed 1992 song A 1000 Hugs and Kisses and new tunes Big City, Satisfied and When She Comes.

Fan favourite Sometimes It Snows in April had slight touches of Purple Rain in it, while he dusted off I Love U In Me, a b-side from the Batman era — the kind of thing fans dream of hearing.

Only Bruce Springsteen puts on these kind of spur-of-the-moment shows where you know every concert will be drastically different.

During one song he tapped his feet to make a beat, demonstrating he was wearing shoes that flash and light up, similar to the ones kids have. He may well be the only adult that can pull them off.

The show was delightfully loose. “Space is part of the music,” he noted at one point.

After an encore Prince asked “Mind if I jam a little?” Not when that jam becomes a medley of Raspberry Beret, Paisley Park, Starfish and Coffee and a jaw-dropping version of Adore, again for Vanity. You really felt you were watching something special, a glimpse into his heart that would never be repeated.

The adoring crowd partied like it was 1979 — phones weren’t allowed or used, and there were no media photographers. It lives on only in memory.

Prince is obviously a genius, but he’s got another commodity that’s been lost today — mystery. He’s the kind of artist who decides to tour on a whim, then reinvents his catalogue on a piano and blows your mind.

It was only the use of an iPad on top of his piano, with lyrics he constantly scrolled through, that reminded you he’s human and uses modern technology too.

“Can’t nobody do it like Prince,” he says at one point. Amen.

Omg la deuxième setlist !!! Joy in Repetition et When the lights go down
L is 4 lust
O is 4 obsession
V is 4 the vast way u envelop my soul
Haut 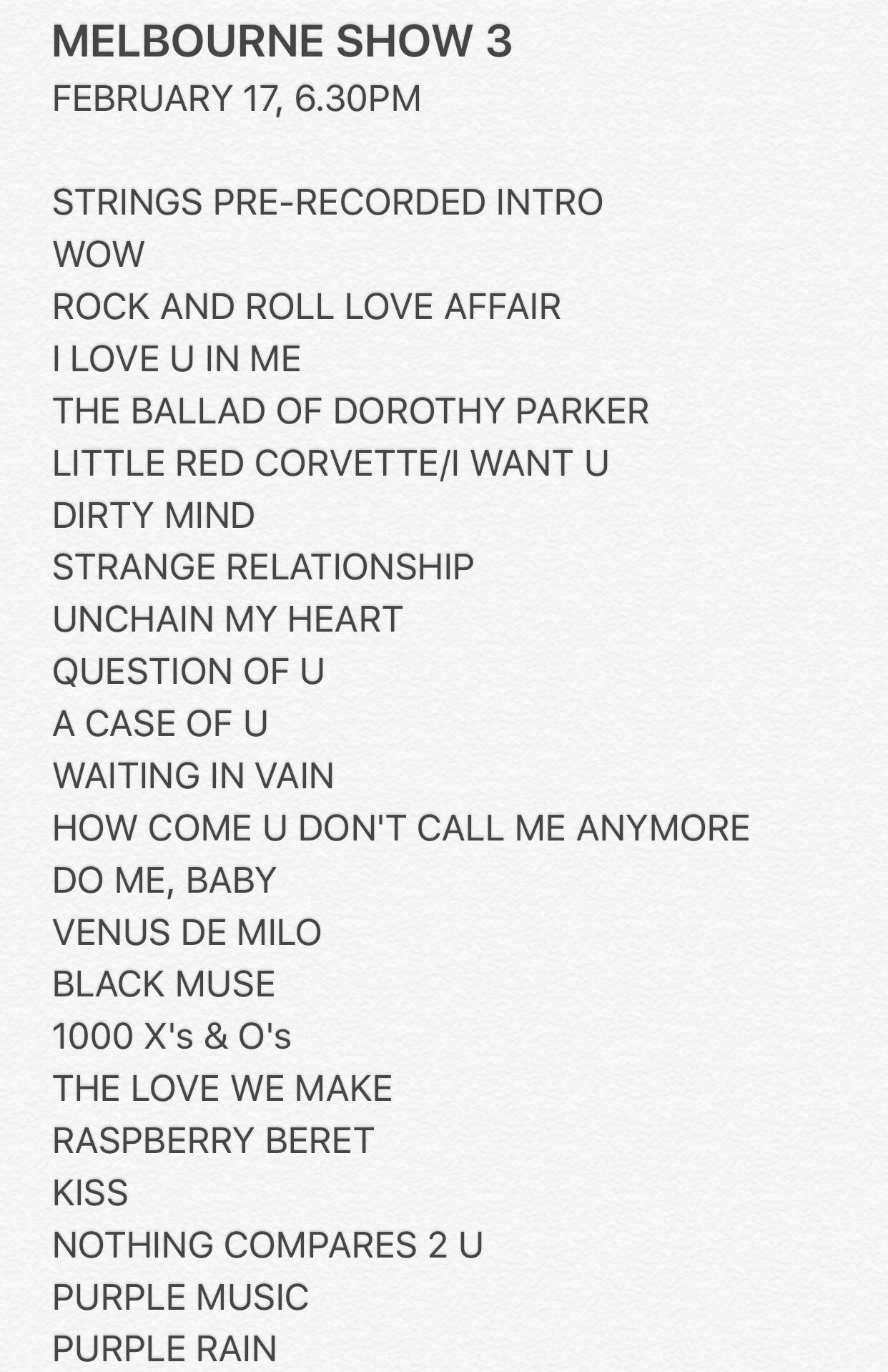 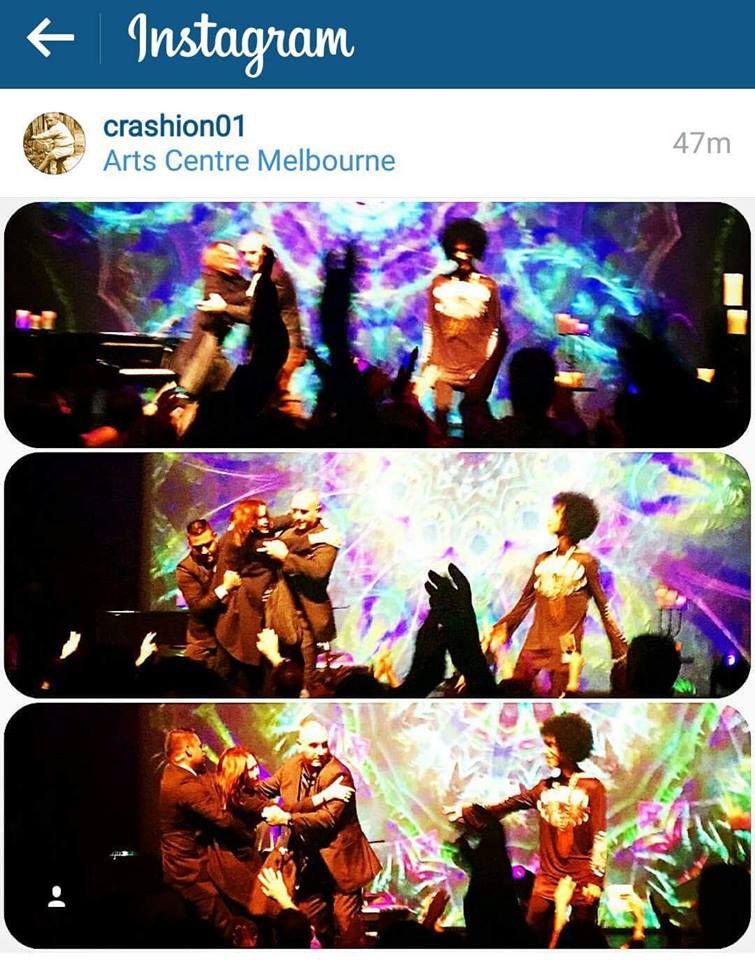 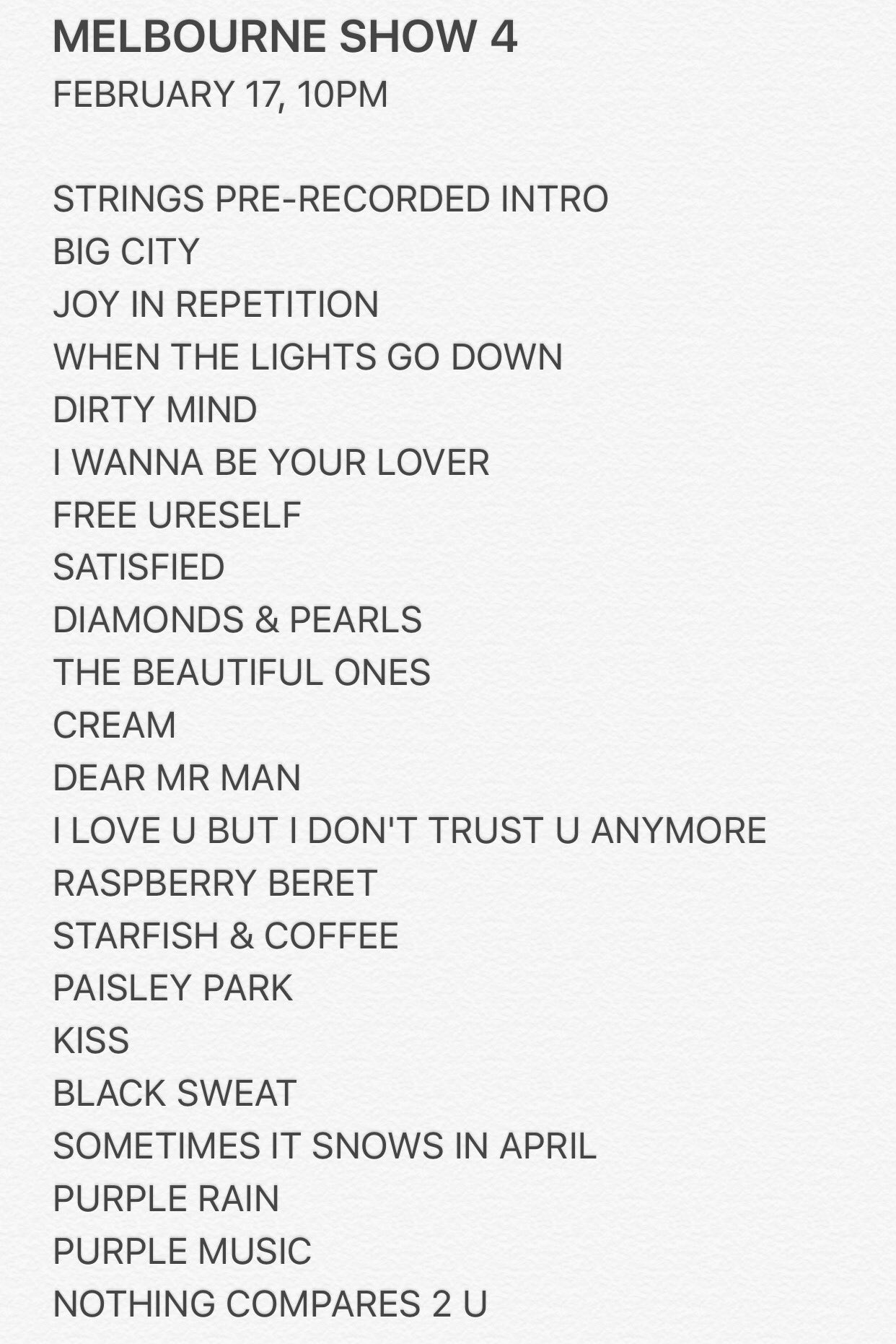 Big City
Joy In Repetition
When The Lights Go Down
Little Red Corvette
Dirty Mind
Breakdown
Rocknroll Loveaffair
Screwdriver
Eye Love U, But Eye Don't Trust U Anymore
The Ballad Of Dorothy Parker - Four
A Million Days
Strange Relationship
Unchain My Heart
How Come U Don't Call Me Anymore
Waiting In Vain
If I Was Your Girlfriend
Under The Cherry Moon (instrumental)
A Case Of U
Satisfied
Diamonds And Pearls
The Beautiful Ones
Venus De Milo
Sweet Thing
Take Me With U
Girls & Boys
Cream
Free Urself
Sometimes It Snows In April
Condition Of The Heart

Nothing Compares 2 U
Raspberry Beret
Starfish And Coffee
Paisley Park

Love... Thy Will Be Done
Big City
Joy In Repetition
When The Lights Go Down
Little Red Corvette
Dirty Mind
Breakdown
Rocknroll Loveaffair
Screwdriver
Eye Love U, But Eye Don't Trust U Anymore
A Million Days
Strange Relationship
Unchain My Heart
Free
The Ballad Of Dorothy Parker - Four
The Max
How Come U Don't Call Me Anymore
Waiting In Vain
If I Was Your Girlfriend
1000 X's & O's
Satisfied
Adore

Je te rejoins 100 fois, j'en rêvais, je le fantasmais même !
Who's gonna get u high in the middle of the night ?
Haut

"Are there really angels. Or are they just in our mind ? It all comes out in the wash... in time."

"Are there really angels. Or are they just in our mind ? It all comes out in the wash... in time."