The Breakdown
Endorphinmachine
Screwdriver
I Could Never Take The Place Of Your Man
2 Young 2 Dare
Guitar
Chapter & Verse
Liathach (instrumental)
When We're Dancing Close And Slow
I Like It There
She's Always In My Hair
Bambi
Fixurlifeup
Cause And Effect
Let's Go Crazy (incl. Frankenstein interpolation )
Boom / Stratus (as BoomStratus)

VANCOUVER - Would it be enough?

That was the real question at the first of four Prince concerts in Vancouver Monday night at the Vogue Theatre.

Would Prince be able to silence those who were becoming increasingly skeptical that the Purple One would be able to pull off the quadruple gig stunt he planned to repeat in several other cities during his West Coast “residency” tour?

Fans were concerned as well.

There was the ticket price, a whopping $275 for a fixed two-hour set that would likely prevent the usual string of surprises and multiple encores that are Prince’s trademark.

But could seeing the diminutive genre-defying guitar god up close and and personal in a room where you have the possibility of finding yourself at the front, covered in Purple sweat, be priceless? The excitement bordered on the feverish early on, but the buzz faded quickly.

With the concerts in danger of being under-attended, the Vogue created a 2-for-1 deal for its newsletter subscribers. The strategy worked, reinvigorating stagnating sales but in turn infuriating fans that had eagerly scooped up their tickets long ago.

This came on the heels of the unexpected announcement of a tour launch party at the Portside Pub on Sunday, which for $25 offered a sneak peek at Prince’s new band 3rdEyeGirl as well as Prince fave DJ Rashida, complete with a surprise glimpse at a new album tentatively titled Plectrum Electrum, discount offers for Vogue concert tickets, and ticket giveaways. (Prince also showed up briefly, to boot.)

Then Monday afternoon, just a few hours after the two early shows had been declared sold-out: 100 free tickets for the floundering late shows were given to Portside boss Mark Brand to sell via his restaurant Save-On-Meats for as low as $50, with the money going to charity.

A classy move, but hardly a sign of demand trumping supply.

So was it enough?

“Are you all ready for some lip-syncing?” he jokingly asked as lyrics from new song Screwdriver appeared on screen.

Garbed in his long black coat and sporting high heels that never seemed to hinder his strut, Prince played it fast and loose, incorporating a few old riffs into new tunes, jamming out some unknown material for the better part of the first half of the show.

If you wanted the hits, it would probably have to wait after Grantis and Prince played a few wah pedal-heavy face melters and electric funk-rock jams in front of a backdrop of swirling psychedelia and smashing glass.

Plectrum Electrum, whether a full Prince album or not, is going to contain some real scorchers.

One does not question Prince’s creative decisions, but you could be excused for being close to losing your cool as Prince wasted a good five minutes playing a schmaltzy electricity-laden piano-rock instrumental that sounded like a cheesy movie soundtrack, complete with blossoming flowers on screen.

Redemption came a few moments later in the form of a red-hot I Could Never Take The Place Of Your Man and an all-too-short snippet of Guitar, which finally got the crowd singing along.

But it was quickly back into jam mode with 3rdEyeGirl, Prince and the girls going all Zeppelin on the Vogue crowd, with new single FixUrLifeUp coming after another long, funkified blast of guitars, bass and drums.

Fitting, because Prince was doing exactly what he wanted, even if that meant going nowhere fast extending new track I Like It There into a 10-minute session.

You just had to hang on for the ride and make the most of it, soaking in the strobe lights, the guitar fury, and the spectacular HD projections that must have justified at least half the price of the ticket alone.

“You might want to stick around, something amazing is about to go down,” Prince sang 80 minutes in, which is also the point at which the band said goodbye, leaving the crowd clamoring for an encore that should have come much later.

Prince and 3rdEyeGirl would return for a revamped, White Stripes-ified version of Let’s Go Crazy, Ida Nielsen showing off her bass skills, Grantis lying down on her amps as she nailed her solo.

And then it seemed it was all over. Despite fans calling out for more (and with many having already left), Prince would not return.

For the asking price, whether the artist’s name was Prince or not, it wasn’t nearly enough."
Haut

As for the most important part, the music, I’m happy to report that the same amount of effort seemed to go into the set list and transitions as the visuals. For those of you who love rock & roll, this show is definitely for you. It is a much more stripped down and grungy show than the Prince many would expect, and I for one loved it. Everything seemed nearly flawless from front to back and the transitions between records were pieced together with pinpoint accuracy and musical knowledge, something I greatly appreciate as a DJ and musician myself. Prince even teased the crowd with a lip synching bit, while his guitar did most of the talking.
Haut

Get Funky a écrit :The Breakdown? C'est le nouveau titre? 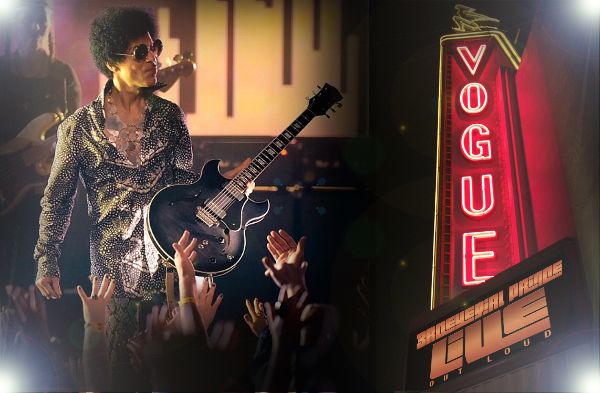