"Act Of God"
"What Have You Done For Me Lately"
"Northside"
"(Theme Song From) Which Way Is Up?"
"Dancing Machine"
"Partyman"
"It's Alright"

"The Love We Make" 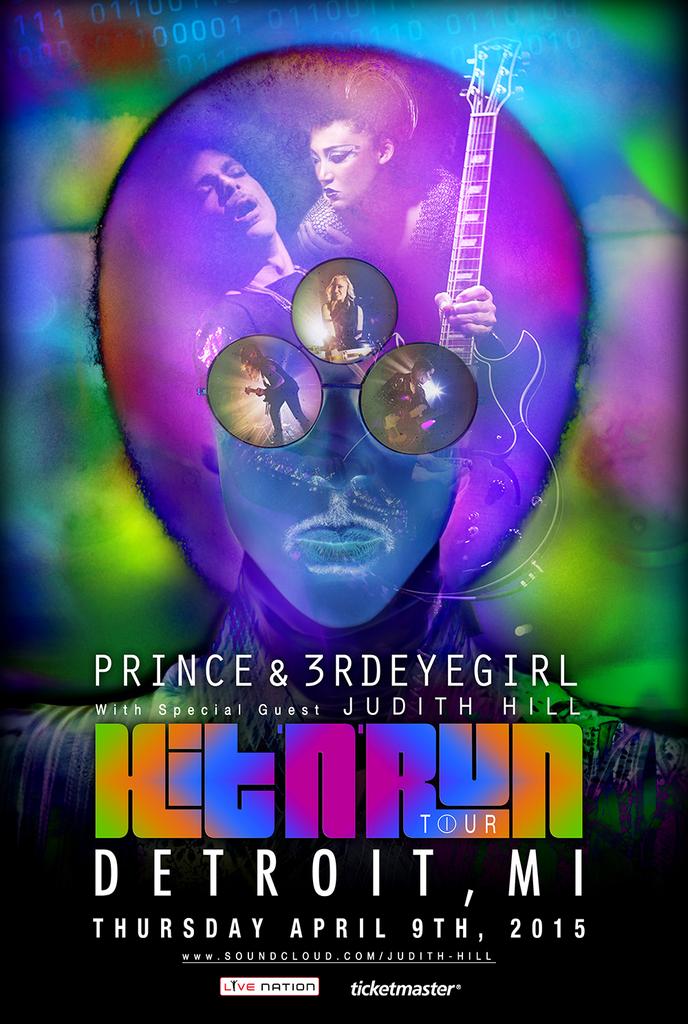 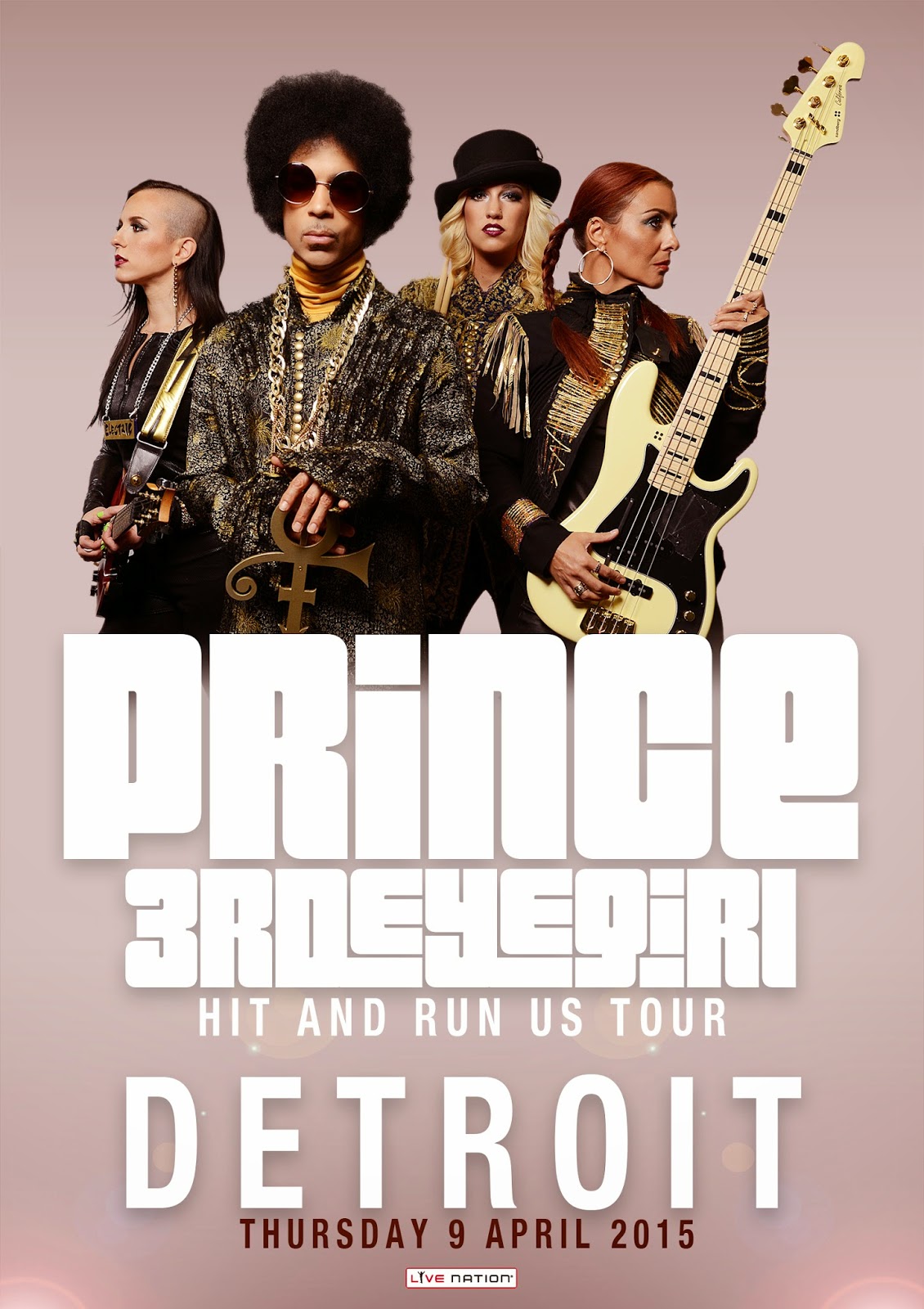 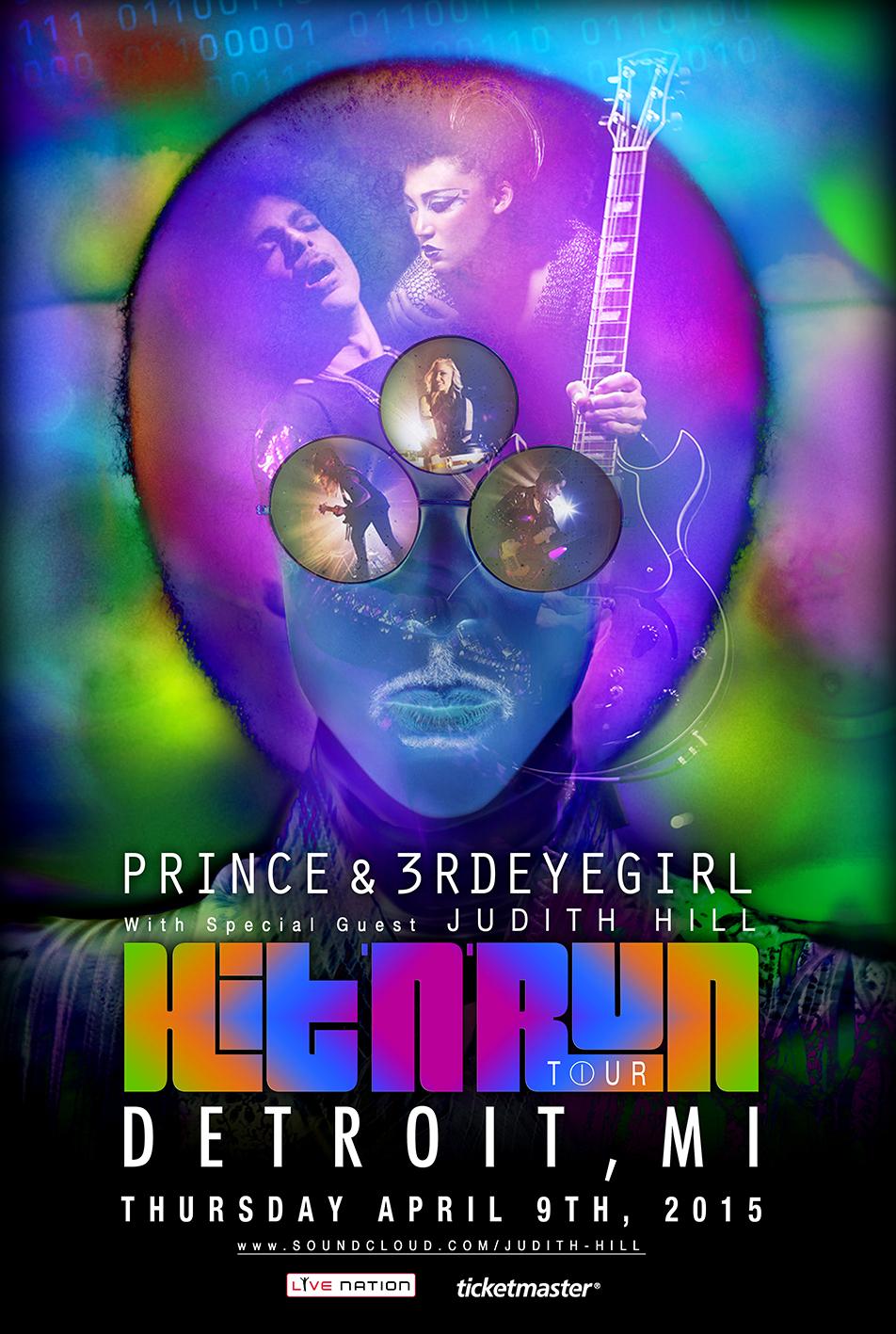 Setlist the best I remember. Someone can fill in the blanks and rearrange. I am going strictly off top of my head
Lets Go Crazy
take me with u
raspberry beret
u got the look
musicology
Sampler set
- when doves cry---start of sampler set(can't really remember past housequake what else was in this one
- i would die 4 u
- housequake
dont stop til u get enough
cool
controversy
1999
how come u dont call me anymore
little red corvette
purple rain
medley with a ton of quick covers - he did throw in partyman though
the love we make
another sampler set
- sign o the times
- pop life
- the beautiful ones
- most beautiful girl
- diamond and pearls
- alphabet st
- nasty girl
- darlin nikki tease
- 777-9311
- love bizaare
-...................(there are more but maybe someone else can fill in the blanks
She always in my hair
kiss
gospel song with judith hill
clouds
encore medley jam(can't really remember other than dancing machine
My overall thoughts. The started crazy good with Lets Go Crazy and Take me with U. Raspberry and U got the look were also good crowd openers. Musicology was a personal downer for me. I am just so burned out on that one. He then went to a really weird sampler karaoke set that just seemed really weird and against what I always thought Prince stood for. I wasn't feeling it honestly. I would rather see him play it rather than playing prerecorded samples but the crowd seemed to like it. I just wasn't feeling this part of the show. Controversy was ok but seemed really short. 1999 sounded great. HCUDCMA was one of my highlights!! GREAT but again a little short. Pretty much the original version with no added parts but he nailed it. Dont Stop/Cool was fun. Purple Rain and LRC were ok. Nothing spectacular but nothing bad. Pretty standard versions as of late. The Love we make was my other big highlight. GREAT version!! I was hoping he would finish it off with a guitar solo but he didn't. The second sampler set was kind of a dud. He just flew through about 15 songs in about 15 minutes it felt like. I am sorry but this part of the show is just really weak and not Prince to me. I feel like this is just a lazy way of killing time but again the crowd I guess seemed to like it so he kept it going. She's always in my hair was one I was waiting for and he cut it way short on the extended part. No Prince solos on this one. The gospel souding song with Judith Hill was GREAT!! I was realy digging this one and Prince seemed to get into this one. No idea the title though. Clouds sounded a little off and was very short. The encore was a good jam the best I remember but can't remember any songs.
My final thoughts - A very good show but not anywhere close to his best. I left thinking for a 56 year old it was good though. He seemed to show his age alot as he sat down alot, played very little guitar and didn't really dance a whole lot. He came out with a ton of energy but it seemed to calm down to more of cheerleader mode after the first sampler set. He did extend the show to it seemed like 3 hours which was AWESOME!! I would give it 4 out of 5 stars but a big drop off from 80s, 90s and early 2000's Prince but for 2015 Prince it was a very good show. The band sounded great. The only annoyance of the show was my wife getting her ticket taken by the security and a stern final warning for sending me a text during the intermission on what she wanted from the bar. She was told she would be ejected if she took her phone out again even if it was during intermission. Kind of ridiculous to me.

Friday night at a sweaty, sold-out Fox Theatre, Prince took 5,000 fans to funk school and added another chapter to his storied Detroit legacy.

For two-and-a-half hours, his Purple Highness laid down jam after jam, hit after hit, and lesson after lesson in how to own a concert stage. His swagger levels were off the charts as he defiantly asked the crowd "what's my name?" and counted off the number of hits he was tearing through like a teacher taking attendance. He was backed by his electrifying band, an amalgam of his 3RDEYEGIRL and New Power Generation outfits that grew to as many as 12 strong.

After 11 years, it was a triumphant return to the town Prince once considered a second home. Prince has a long history with the city that dates back 35 years, and Thursday's show – his first visit to the Fox since playing two shows there in April 1993 – marked his 35th concert in Metro Detroit.

That's quite a legacy, and Prince acknowledged it at the very top of the show, a date on his impromptu Hit N Run outing which was announced only a scant six days prior. "Detroit!" he belted, raising one fist in the air. "It seems like only yesterday. They told me it's been 11 years! Well, if that's true, we're gonna play 17 hits in a row, until I see tears!"

He and his all-female backing band 3RDEYEGIRL then tore into a slowed down, funked-up "Let's Go Crazy" that kicked off a hit parade that passed the 17 marker and kept right on going. By the end of the night, which included three encores and callbacks to everyone from Sly and the Family Stone to the Jackson Five to Wild Cherry to Janet Jackson, the funk was hanging in the air like a dense fog, and Prince kept making it thicker.

Because it was a Prince show, whispers of an after party were heard throughout the Fox lobby prior to the start of the concert, which fittingly fell on a day where a daylong rain – a purple rain, if you will – soaked the city. But Prince treated the entire concert like it was an after party, with a loose, improvisational feel to the proceedings and a festive, whatever-happens-happens atmosphere on stage.

He invited a dozen or so members of the crowd up to dance with him during the show's first section, a seamless 45-minute barnburner that ripped through "Raspberry Beret," "You Got the Look," "Musicology," "When Doves Cry," "Sign o' the Times," "Nasty Girl," "I Would Die 4 U" and "Cool," with nods to his own "Cindy C." and Michael Jackson's "Don't Stop 'Til You Get Enough" mixed in. "I'm the DJ now! I play what I want!" Prince said, treating the Fox Theatre like his own personal house party. "Old school! We going back to the '80s!"

He spent a lot of time digging through his 1980s material, later cutting into "Controversy" and lifting the night's strict ban on cell phone usage during a celebratory "1999." That led right into the single's B-side, "How Come U Don't Call," and later into "Little Red Corvette," which was transformed into a sexy slow jam. A playful call-and-response at the end of the song led into a reclaimed "Nothing Compares 2 U."

"You've got a beautiful city and beautiful people, please take care of it for me so I can come back," he told the crowd, teasing a return to the Palace of Auburn Hills and shouting out the Palace's other Prince, Detroit Piston Tayshaun Prince. He then razzed the audience by telling them he'd "run out of hits" and faked like he was leaving before kicking off another set of bangers starting off with "Kiss" (which included a reference to "Preachers of Detroit" in place of the original song's hat tip to "Dynasty").

An epic "Purple Rain" that found Prince bathed in purple lighting, roaring through its monumental guitar solo, seemed to signal the end of the show, but after eight full minutes of applause Prince and his band mates returned for two more encores that stretched another 30 minutes. A jam that wound through his "Act of God," "Partyman," Janet Jackson's "What Have You Done for Me Lately?" and Jackson Five's "Dancing Machine" ended with Prince rhetorically asking "don't you love funky music?" He then went on another jag and tore through a huge swath of his catalog like he was shuffling through a greatest hits playlist, winking at "Diamonds and Pearls," "Darling Nikki," "Forever in My Life," "Alphabet St.," "The Most Beautiful Girl in the World," "Pop Life" and more. "How many hits I got?" he asked, metaphorically beating his chest. It was just one of those kinds of nights.

Things weren't so hot at the beginning of the night when the venue's paperless ticketing system – put in place in an effort to thwart scalpers – ran into a mess of technical problems. The Fox's doors opened at 7 p.m. sharp but credit card scanners were off line for 25 minutes, causing a bottleneck in the Fox lobby and a line that stretched outside the building for several city blocks. That backed off the start of the concert, and opener Judith Hill's spirited set, by 40 minutes, and forced fans to wait outside in the wind and rain.

But all's well that ends well. Prince closed the night with "The Love We Make," a track from "Emancipation," an unpredictable end to a wild evening that served to remind fans with a catalog as deep and as vast as Prince's, you never know where he's going to turn next.

The 56-year-old icon, dressed in gold lamé and with his hair puffed out, looked and sounded in prime shape. Even when barking orders to his tech team in the thick of a jam ("We gotta do soundcheck all over – sound man knows it!") he was in time and on message. "We the best!" he boasted at one point. And on this night – a towering evening of music, fun and communal joy – there was no arguing with him.
Haut 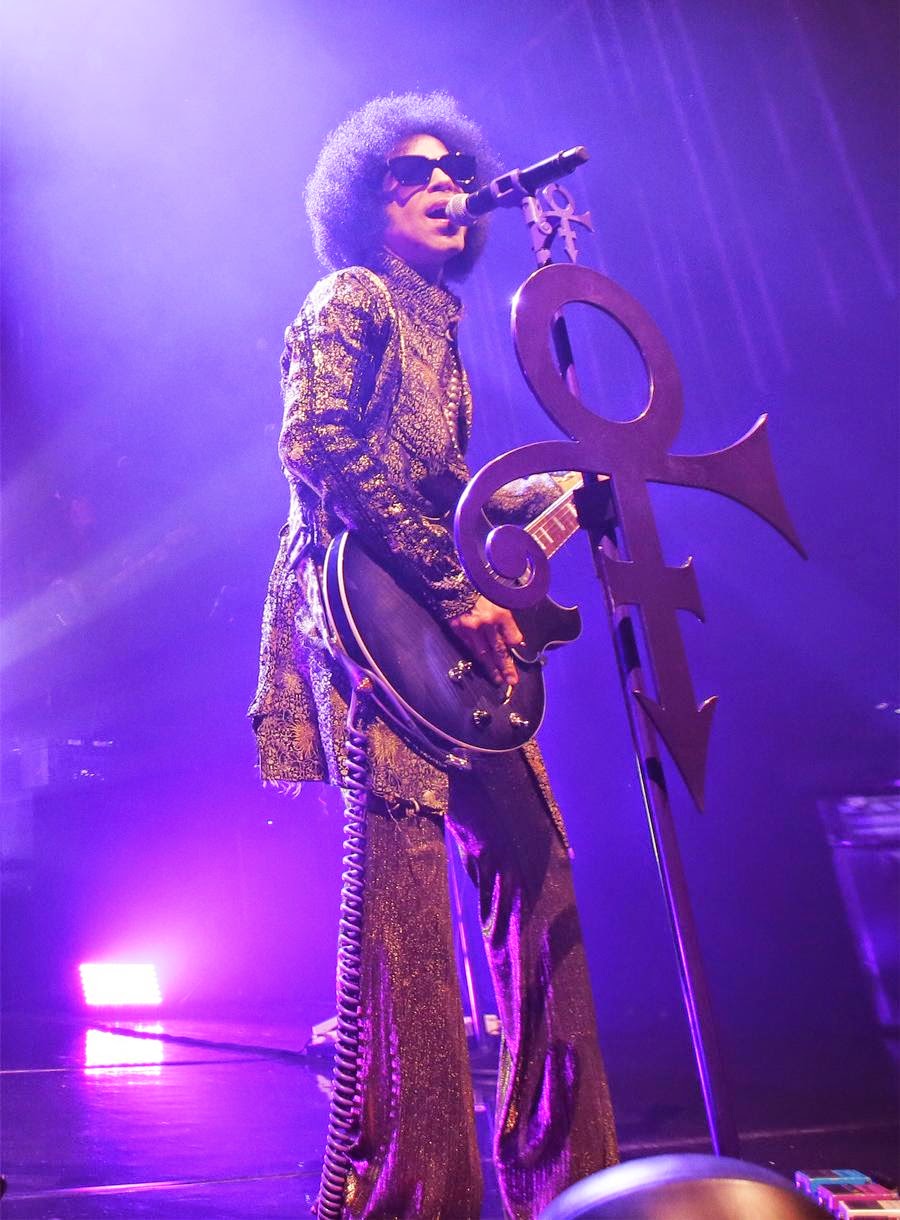 "Act Of God"
"What Have You Done For Me Lately"
"Northside"
"(Theme Song From) Which Way Is Up?"
"Dancing Machine"
"Partyman"
"It's Alright"

"The Love We Make"

Magique.
"I love this song."
Haut